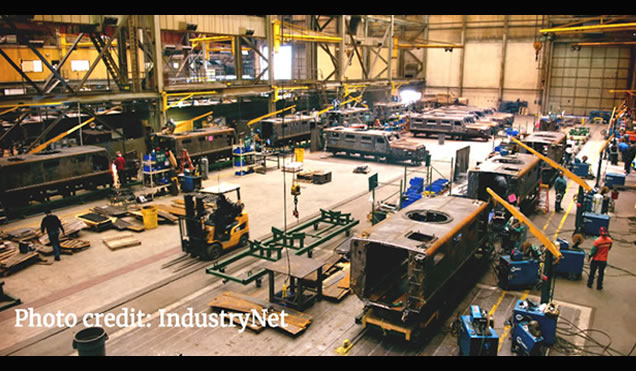 Why U.S. Manufacturing Executives are Optimistic

A recent article on the IndustryNet blog regarding optimism among manufacturing executives caught our attention. The article, citing various reports from the Department of Labor and the Federal Reserve, suggests that industry confidence is not misplaced. Despite the positive sentiments, however, a number of executives also expressed concerns about the recent government shutdown and its impact on manufacturing. Lastly, while still a concern, tariffs are not causing as much consternation as they did in previous months.

The article is reprinted below.

The Department of Labor reported the sector added 13,000 manufacturing jobs in January, adding to the staggering 261,000 jobs created in 2018.

In addition, the Federal reserve reported output was at a 10-month high, and the Institute for Supply Management released its monthly manufacturing report on business and found overall activity in the sector rebounded from its December.

The DOL also just released its manufacturing output report, which found that industrial production increased at a 1.3% rate in the fourth quarter of 2018.

A number of major manufacturer announcements were made in January, including Intel’s plans to expand chip manufacturing in Oregon, while just this week, Ford announced it would be investing $1 billion at its Chicago facilities.

Growth in U.S. industrial activity was led by a surge in new orders, which climbed nearly 7%. The ISM’s Production Index also posted a significant gain, up 6.4%.

In fact, all of the ISM’s activity readings, apart from customer inventories, were firmly in expansion territory.

Comments from the panel of executives that responded to the ISM survey reflected a general optimism for the future, though concerns over tariffs and the government shutdown have lingered.

Manufacturers responding to the ISM’s survey appeared to be fairly optimistic about business conditions, citing a strong economy and increased demand.

Said one executive in the machinery sector: “We continue to enjoy the benefits of a strong global economy. We are busy and maintain a backlog of sales orders.”

Another in the plastics and rubber industry stated, “January is off to a good start versus a lower November and December. We are ahead of both plan and January 2018 performance.”

“Going to be a very strong spring,” said an executive in the fabricated metals sector. “Business levels will be just as good [compared to] the same time frame in 2018.”

“Business conditions are good, and our demand and production are tracking to our forecasted growth levels for the year,” said one executive in the miscellaneous manufacturing category.

Yet, despite the positive sentiments expressed in the survey respondent’s section, a few conveyed concerns related to tariffs and the government shutdown.

The longest government shutdown in U.S. history had an impact on many industries, impacting everything from import inspections and label approvals to federal contracts and small business loans.

The food and beverage industries were among those most impacted by the shutdown, with the FDA no longer performing as many inspections, and the nation’s breweries and vineyards putting new ingredients and products on hold as they awaited approval from the Alcohol and Tobacco Tax and Trade Bureau (TTB).

“The federal government shutdown is impacting our ability to get new products launched. All wines need TTB [Alcohol and Tobacco and Trade Bureau] approval. We are reforecasting accordingly,” said an executive in the food, beverage & tobacco products category.

Now that the federal government has re-opened, these concerns are mostly short-term, though it may take some time for those most affected to return to normal.

Largely missing from January’s responses were executives’ concerns about tariffs, which tended to dominate responses in previous surveys conducted by the ISM.

For nearly a year, tariffs have persisted as a top concern for many manufacturers, as companies scrambled to reassess their supply chains and struggle with rising prices.

In January, however, just one executive out of the sample published by the ISM commented on tariffs, stating “Steel tariffs continue to put upward pressure on prices of downstream materials.”

However, the 90-day truce struck in which the U.S. agreed to delay its proposed 25% tariffs on $250 billion worth of Chinese goods, is set to expires in March.

Currently, those Chinese imports are being taxed at 10%. In the absence of a presidential order, that rate is expected to rise to 25% starting March 1st.

Recent reports indicate the Trump administration has no plans to meet with Chinese leaders in the interim, which is likely to set off concerns among manufacturers in the coming months.

Overall, U.S. manufacturers appear to be optimistic about business conditions in the coming months, despite the temporary setback of the government shutdown and concerns over tariffs.

For a complete rundown of the ISM report and the week’s industrial headlines, see our post U.S. manufacturing activity rebounds in January.

Changing trade policies and increased demand have a significant impact on American businesses, with many reexamining supply chains and searching for domestic suppliers.

Reposted with permission; Posted by IndustryNet on Friday, February 8, 2019

Previous Story
← What is the difference? MPS and MRP
Next Story
Your guide to surviving Brexit →