The Updater for xTuple ERP is an application which enables you to update your databases from one release to the next, to upgrade from one xTuple ERP edition to another, such as from Manufacturing to Enterprise Edition, and to load supplemental extensions into your xTuple database. The Updater reads and processes upgrade scripts or packages, which are collections of files bundled together into .gz files. This article describes the processes involved with loading and running these packages using the Updater application.

But first, if you need help with specific problems related to upgrading your xTuple ERP database, there are several other pages you might want to look at:

xTuple ERP is a large application that conceptually can be divided into the following parts:

The Updater is xTuple's tool for making changes to the database schema and stored procedures that correspond to changes in the client application. These changes might include adding new tables, modifying the structure of existing tables, and adding internal data. On occasion the nature of the changes is such that end-user data need to be manipulated. An example of this was the introduction of item units of measure, for which data previously stored in the item table were moved to a separate table. The update package for this change created the new itemuom table and populated it from the existing data in the item table before dropping the no-longer-used columns in the item table. The vast majority of changes made during updates, however, do not change end-user data.

How to Update xTuple ERP

Tip: Before performing any updates to a database, you should first make a backup copy of the database you are updating. Having a backup ensures you can always go back to the original database if errors occur during the upgrade.

To perform an update on an existing system you need to assemble the following pieces:

Then the process of updating is fairly simple:

Because this is an update to an existing system, presumably you already have:

Getting the update packages

The update packages are used to upgrade your xTuple ERP to a newer version. The naming convention will vary, depending on the xTuple ERP edition you are running.  In summary using examples:

Tip: A note to Mac users: The Safari web browser uncompresses .gz files after it downloads them. For the time being, your options are to recompress the package files after downloading them (you can use gzip in a Terminal window or various GUI tools) or download them with a different web browser.

Getting the xTuple ERP application

First things first - upgrading is always risky, no matter how careful everybody is. Do your part: back up your database before you upgrade.

Practice to check for errors

Now use that backup to create a copy of your database. By upgrading a copy you can test for problems that might arise during the upgrade:

Start the Updater application and log in to the database you want to upgrade. This login procedure is the same as when logging into any xTuple application. Once you have logged in, select the "File | Open..." menu option and choose the first package you want to use.

Info: You should log in to the Updater as the default xTuple superuser (e.g., admin or mfgadmin) to ensure your upgrades are performed successfully. The Updater warns you if you try to log in without being a superuser.

Note: By default, the latest version of the Updater runs an entire series of upgrade scripts as a single commit that will be rolled back if any errors are encountered. This ensures that databases will not be left in a partially-upgraded state if errors are encountered during the upgrade process. Either a database is upgraded to the next version successfully, or the upgrade is cancelled and the database is restored to its original state. 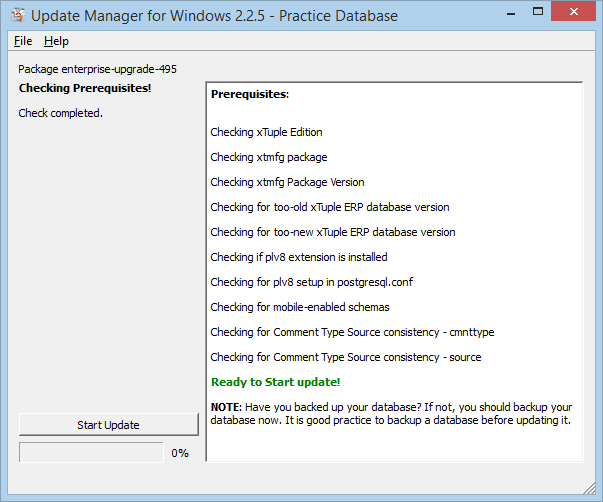 Depending on the exact state of your database, you may get some error messages. Some of these errors may be safely ignored-- especially those which indicate plainly that they were ignored. Other errors may require you to take specific actions. You should examine such errors closely. After examination, you may either choose to ignore the error, retry after correcting the problem on the database, or abort the update altogether. If there were some errors which were ignored during the processing, newer versions of the Updater (2.0.0) will ask if you want to roll back the changes or accept them in spite of the errors. Either way, you can always go back to your original database as long as you remembered to make a backup copy before you started the upgrade.

Once all the structural database changes have been made, the updater will update any new reports that are available.

When the updater progress bar reaches 100%, you may open a new package or close the updater application. Your database is now updated to the next version.

Note that if you are updating over several releases, practicing now will help you find a lot of problems before you attempt to update your production database.

Once you have updated the practice database successfully, you can now switch to updating the production database. Back up your database again, since it's probably changed since you did your backup for testing the update process. Follow the same steps as you did during practice, but fix any data that might have failed prerequisite checks before you try to run the update package.

Use the new client application

Now that the database is up to date, make sure you use the right version of the client application with it. This might mean loading a new version on a file server for all of your users to share or putting a copy on every client machine. However it gets done, make sure it happens.

Depending on the nature and scope of the extension package you've loaded, it may or may not be necessary to grant additional privileges to users who will need access to the new functionality. In addition, system administrators can manage extension packages, once they have been loaded, under the System > Design menu.